In 1924, Bishop Molloy appointed Father Bernard J. Reilly to establish a parish in the growing community of Queens Village. Five years after his ordination to priesthood in Innsbruck, Austria, Father Reilly had joined the U.S. Army as a chaplain during World War I. While serving in France he visited the shrine of Our Lady of Lourdes. It is said that he was so impressed the he vowed if and when he would be made a pastor, he would insist on having the parish named in honor of Our Lady of Lourdes.

The first Mass in the new parish of Our Lady of Lourdes was celebrated on October 19, 1924 in the uncompleted house at 92-78 Winchester Boulevard. Within seven months a church was built on a neighboring parcel of land, the only other piece of property which the parish then owned. Eight years later a school was built and staffed by the Dominican Sisters of Kentucky, and private homes had been purchased on 220th Street and on Spring Boulevard to serve as a Rectory and a Convent. The parish was growing quickly.

The original church still stands and is still used. As time went on, however, and the parish continued to grow, the old “chapel” was obviously too small. The new church (and attached rectory) was built and dedicated by Archbishop Molloy in 1955. The new church was renovated in 1987, with some additional restoration in 1994. In 2008, a Capital Construction Campaign was launched for more work on the inside and outside of the church. This work restored the church to its former beauty. The original school building also began to grow. Beginning with sixteen classrooms in 1932, in 1960 eight more were added. The school grew to 34 classrooms with the construction of the new wing and the new convent in 1966. The original convent that began as one private house on Springfield Boulevard had been enlarged by joining it to a neighboring house. With the construction of the new convent, the old one was taken down and became the school yard. Many changes in buildings took place, which grew to meet the needs of the growing parish. 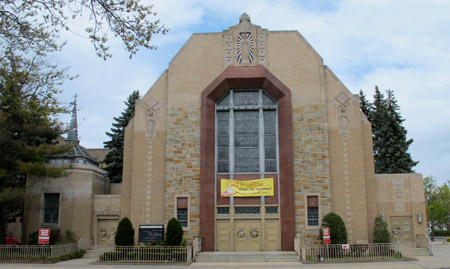 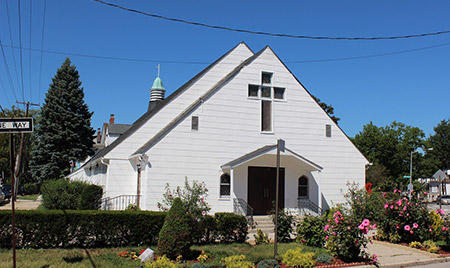 Today, Our Lady of Lourdes Parish is a multi-ethnic active parish, trying to carry out the mission of the Church in the community of Queens Village. Mass is celebrated in both the main and the old, original “chapel.” While most celebrations take place in the main church, the “chapel” is used for the Spanish Mass, Masses in Tagalog, French/Creole, Portuguese and Tamil, weekday masses during the summer (more easily and quickly cooled by the air conditioning) and for weddings and funerals when the families prefer the “chapel.” Because of the large size of the church, the ample parking and convenient location, the parish church has been used for many diocesan celebrations. The NYC Police Department Holy Name Society of Brooklyn and Queens holds its Communion Breakfast at OLL every year. During our 75th Anniversary in 2000, the parish church had been the place for several diocesan celebrations; including the Rite of Election in February 2000, the Right of Admission to Candidacy for those in the Permanent Diaconate Formation Program in April 2000, and the Migration Day Mass and exhibit in May 2000.

The parish school has an enrollment of over 300 students from Nursery to 8th Grade, from many different backgrounds, languages and cultures. In 1999, the school received accreditation by the Middle States Association of Colleges and Schools, and had begun working on its goal of integrating computer technology across the curriculum on all grade levels.

The parish religious education program has approximately 200 students from Pre-school through High School. It includes the R.C.I.A. for Children, special Sacrament Programs, and instruction for Children with Special Needs. There is a parish youth group for high school students with discussions, socials and service activities. The large parish gym makes possible an extensive sports program for young people of all ages, and includes activities such as basketball, track, and swimming.

The Parish Outreach Program includes a wide number of services for families and individuals of the community with various needs. The Food Pantry, stocked by weekly contributions by parishioners as well as donations from neighboring churches and community groups, serves over 5,000 people with food packages. In addition, the Outreach Program sponsors several food drives at local supermarkets several times a year, as well as the Christmas Giving Tree. The Outreach Program also coordinates the parish ministry to the sick and homebound, operates a bereavement program, and sponsors a Blood Drive Program each year.

The Bethsaida Spirituality Center, the building which began as a convent in 1967, now serves a variety of roles. Serving as a home for the Dominican Sisters of Kentucky who staffed the parish school until 1990, the building still serves as home for three Sisters of Saint Joseph (Brentwood). In addition, parish groups use various parts of the building every day of the week, and there is a steady stream of groups from outside the parish who come for retreats, days of recollections and various other activities.

Yes, today Our Lady of Lourdes, while different from the Church of 1924, is going strong. This multi-ethnic, multi-cultural, multi-lingual parish serves as a microcosm of the universal Church. It truly is the “Catholic” Church in part of Queens Village. Our zip code, 11428, is the 2nd Most Ethnically Diverse City in the United States. Our International Nights have brought people together from many different countries.